skip to main | skip to sidebar

Some pitures and memories of my two years on the Bothie. 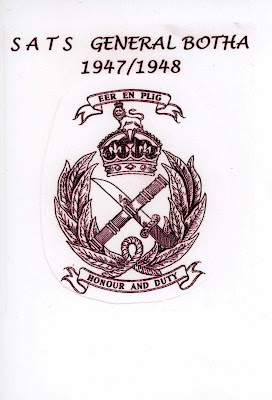 The South Africa Training Ship/Nautical College General Botha,popularly known as "the Bothie",started it's first cadets in 1922 and numbered them incrementally.I was No1506 in the sequence and the pictures and memories below relate specifically to my 1947/48 period of training. There is no strict order but generally Red Hill appears, then Gordons Bay and last Bothie events after 1948.
The pictures were collected from those given to me by other cadets or from professional photographers (I had no camera). Some are old press cuttings and the quality is poor. I have given cadet names where I can remember them and apologise to those for whom I have put a question mark. Names are of cadets in the 1947 year intake unless otherwise stated.
Apart from nautical terms such as "Heads" for latrines the Bothie had a small vocabulary of its own which probably changed in some respects over the years but first year cadets were always (unofficially) called Chums, second year cadets were Old Salts and keeping watch for approaching authority was "Keeping Sponsies". In my time cigarettes were called "burns", sweets or delicacies were "ergs" or "gwogs" (so a gwogbox was a food parcel from home) and the cleaning fluid Brasso was called "bluebell".
There are 38 pictures to follow (including "Older Posts" ).
For comprehensive information about the Bothie go to its website:-
www.generalbotha.co.za 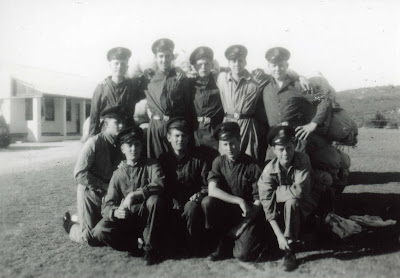 On the Bothie we cleaned up every day but Friday was special - in the afternoon we donned our overalls and prepared for "Captains Rounds" on Saturday morning.The picture shows the chums of Foretop in front of the hammocks removed from the main hall so they can scrub the floor - 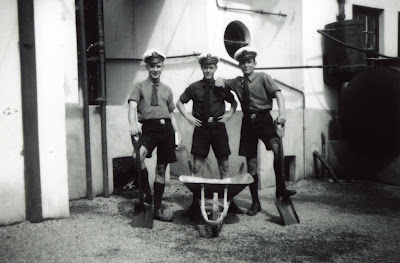 Labour was still required for cleaning ship in our second year but I had promotion. Hot water for the showers at the top of the hall was supplied by a coal fired boiler in an adjacent room. I with Deitz and Tiny Coleman(the two Rhodesians) was assigned to maintain the boiler room and cart coal from the galley bunkers. We took great pride in the boiler room appearance and received a special issue of Bluebell to shine up its brass taps and copper pipes. We are seen here with our wheelbarrow (Deitz on the left and Coleman in the middle). Tiny Coleman came back from Rhodesia with an HMV wind up gramaphone and records including Ivor Novello's "We'll Gather Lilacas"; Sadly he was lost at sea in his first year after leaving the Bothie. 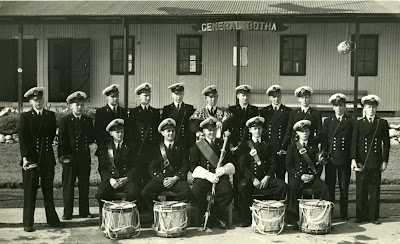 On the Bothie the main activities of the day were regulated by distinctive bugle calls - "Charlie" (Reveille) to rise, "both watches" to call the ship's company together, "mess cooks" to have tables set, etc. Four of the band's buglers were appointed to sound these calls taking it in turns to be on duty for solo calls but playing together for the main events - "Charlie", "General Salute" at the raising of the flag "Sunset" when the flag was lowered and "Last Post" at the end of the day. Duty buglers would be woken by the night watchman, "Pop" about fifteen minutes before everyone else so that they could play "Charlie" in the main hall in front of the Honours board. They would stay up when others snuggled into their hammocks and turn in after Lights Out. This was not so bad in summer but not so good in winter.

Duty buglers were paid three shillings and sixpence per month in addition to their one shilling per week pocket money. I had owned a bugle before joining the Bothie and was soon made a duty bugler - the only Chum for most of my first year. Old Boys will know what I mean when I say that somehow I did more solo calls than my Old Salt fellows getting their three and six. At the final prizegiving I was awarded the "Silver Bugle Floating Trophy" for getting up early and going to bed late. I wonder what happened to this fine old instrument that hung in the trophy cabinet. 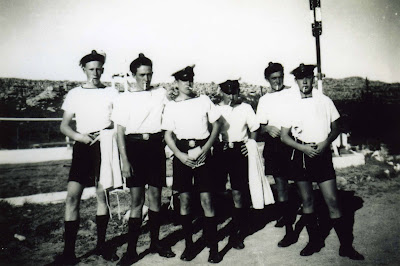 I was one of those foolish enough to smoke but at least with the sense to give it up in later life. There were two places on Red Hill used to conceal this illicit activity. One was "Joe's Hole" (Joe was the nickname for Captain Pennington). This was a depression in a far corner of the sports grounds partly filled with water but low enough to conceeal and give ample warning of approaching authority. The other more convenient and thus popular venue was the washlines. We had a Bothie song about it which we sang on occasions like being transported in the troop carrier. Some words I remember

Seamanship Instructor "Tallow" Gough was also called Ernie and he would report a smoker to Chief Officer Prest who would PUT the offender on Captain's Report. The word PUT was emphasised and pronounced as if it were a golf stroke because that is the way "Chiefie" Prest pronounced it. 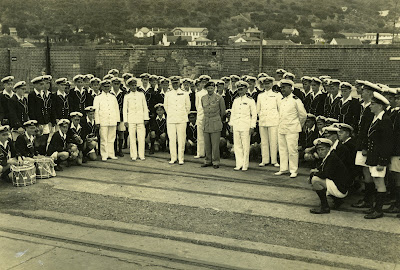 In 1947 World War II had recently ended and Simonstown being the Royal Navy base of the South Atlantic was included in the itineraries of many of Britain's VIPs who made goodwill tours of South Africa. The Royal family came and the local population crowded on Jubilee Square to welcome them. The Bothie were allocated a place and some cadets in the front rank were spoken to by members of the Royal party.

Field Marshall Montgomery, hero of the North Africa campaign also paid a visit and the Bothie paraded in Simonstown Docks as part of his reception. He signed the big drum and posed with the ship's company in the above picture - the dignitaries in the front are:-
"Tallow" Gough, Chiefie Prest, the RN Admiral, Harry Pinn, Monty, Legassick,
Bob Mercer and Bert Caustick. 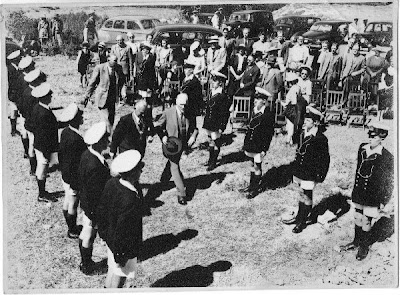 Another VIP visitor to the area was then Prime Minister, "General Smuts" when he opened a camp for needy children at Glencairn. The Bothie formed a guard of honour.